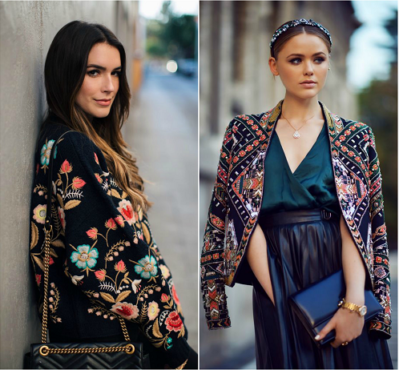 But everything was not always like this. A few years from now, embroidery was considered a covert ‘art form’ that lacked commercial interest of any form to the fashion industry. Not that embroidery embellishing was no longer appreciated or enchanted. It was the unfeasible economics that made it persistently difficult to operate businesses around it.

What was the problem in the first place?

Being obsolete and not adapting quick enough to changing circumstances. The one liner pretty much sums it up. Do not get me wrong. I am not undermining the very art in its very essence. Irrespective of how romantic a woman sitting by the window, embroidering a handkerchief may sound, hand embroidery has little worth for mainstream fashion due to its innate limitations.

To start with, the time consumed to produce hand embroidery is unrealistically high. This significantly increases labor costs. This makes it almost impossible for fashion brands to continually include embroidered patches in their products. Other reasons that hindered mass adoption include lack of readily available skilled labor and absence of uniformity in designs. All this cumulated to raise the prices unrealistically high for the final product.

Was Machine Embroidery The Answer?

Machine embroidery has been around for quite a while and despite that, embroidery struggled to make it to the mainstream. In fact, the first embroidery machine was built in the 19th century. The first improved version of the machine also came about the same time. The process was still laborious, time-consuming, costly, and inefficient.

It was not until the late 1980s, that computers made an entry in almost every industry. The boom that machine embroidery enjoyed was after the advent of computerized embroidery machines. They were fast, efficient, and easy to operate. Moreover, the unprecedented ability of these machines to deal with intricate designs was a real game changer. Sophisticated embroidery machines and computer programs continued to sprout, making the process even more refined.

The computerized embroidery is also around for at least two decades. Despite this, we see that fashion brands only took the trend a few years back. It seems that there was a reluctance to adopt embroidered designs. The reluctance apparently comes from the history of embroidered patches.

The reluctance towards embroidered patches was not entirely because of the aforementioned reason. It grew into something more ‘terrible’ because of things it symbolized. Embroidery patches were quintessential of hip and subcultures. Whether it’s biker culture in the 60s, or hip culture in 70s, or the punk rise of the 80s, embroidery patches have been everywhere- except the mainstream fashion. These patches symbolized their rebellious and nonconforming attitude towards social norms and values by these subcultures.

These influences further stigmatized the use of embroidery in mainstream fashion. Of course, they have been around in one way or another but by mainstream fashion, we refer to the mass adoption of a trend. Not niche or interest based.

Although the above-mentioned stigma was still there, the 90s saw a somewhat adoption of embroidery patches by the fashion world. The punk culture was on the rise and being quirky was not anymore unacceptable. Various designers like Vivienne Westwood and Malcolm McLaren sort of mainstreamed the embroidered patch. Not only it was partially interest based, the trend was short-lived. Soon the 90s were over and with that, the trend was over too. The new millennium did not like patched jackets and jeans and carrying them, was no more- cool.

Now, we are talking about the recent times and what invoked the comeback of embroidery after more than a decade. Embroidery patches were widely deemed unacceptable because they still felt like ‘patches’. They did not seem like a natural embedment to the piece and because of its cheesy outlook, embroidery was unacceptable for high-end fashion brands. But what if they did not feel that way anymore?

While the embroidery was out of fashion, the technological advancements in computerized machine embroidery continued to perpetuate. Machine embroidery and sophisticated technology once again came to the rescue. Computerized embroidery machines made it possible to produce designs that gave a lavishing finish while incorporating fine details at the same time.

Even though it was now possible to create high-end designs, with minimal effort and time consumption, the forbidding relationship still seemed to exist. The reluctance barrier was difficult to break. After all, it was mainstream fashion and nobody was ready to jump in except small brands, who mostly pursued that as a side hustle. They were anything but mainstream. That said, they were the only ones who were ready to experiment with the recent advancements in machine embroidery.

Many such brands jumped in the hustle. Pop culture was on the rise and small brands incorporating those designs, made a handsome fortune. While this was happening, big brands took note of it. They realized that a concept that they have engraved in the chapters of past could still be novelized with latest machine embroidery. They remodeled embroidered designs in a manner that seemed experimental and cool, with a pinch of past.

High-end fashion industry thought of the idea to be cool. Cool enough to hit the market high and make these designs crazy trendy. They were right about it and the embroidered designs are now almost anywhere. The most revered among the high-end fashion brands was Gucci as they were the first to jump in. To follow the trend, there was a long list of reputed brands like Fendi, Roberto Cavelli, and Dolce&Gabbana. Since embroidery was now hitting big, celebrities also didn’t hold back. Fashion tastemakers like Rihanna, Olivia Palermo, Bella Hadid and Karlie Kloss, have all been spotted carrying embroidered jackets, jeans, and bombers.

Not only limited to clothes, machine embroidery has made it possible to embroider over a variety of products. Not only leather jackets, denim jackets, and jeans, leather skirts, accessories like handbags, shoes, and belts are also now embroidered.

Only time can tell that the trend is here to stay or will it be just another 90s’? Unlike the 90s, the trend is overwhelming and it is everywhere. It has been widely endorsed and embraced. Though odds suggest that machine embroidery designs are here to stay, the possibility of an otherwise situation cannot also be put-off the table.

For professional assistance with custom embroidery digitizing you may reach us anytime.

Tips to Start and Grow Your Machine Embroidery Business